What Works in Corporate Coaching Programs? 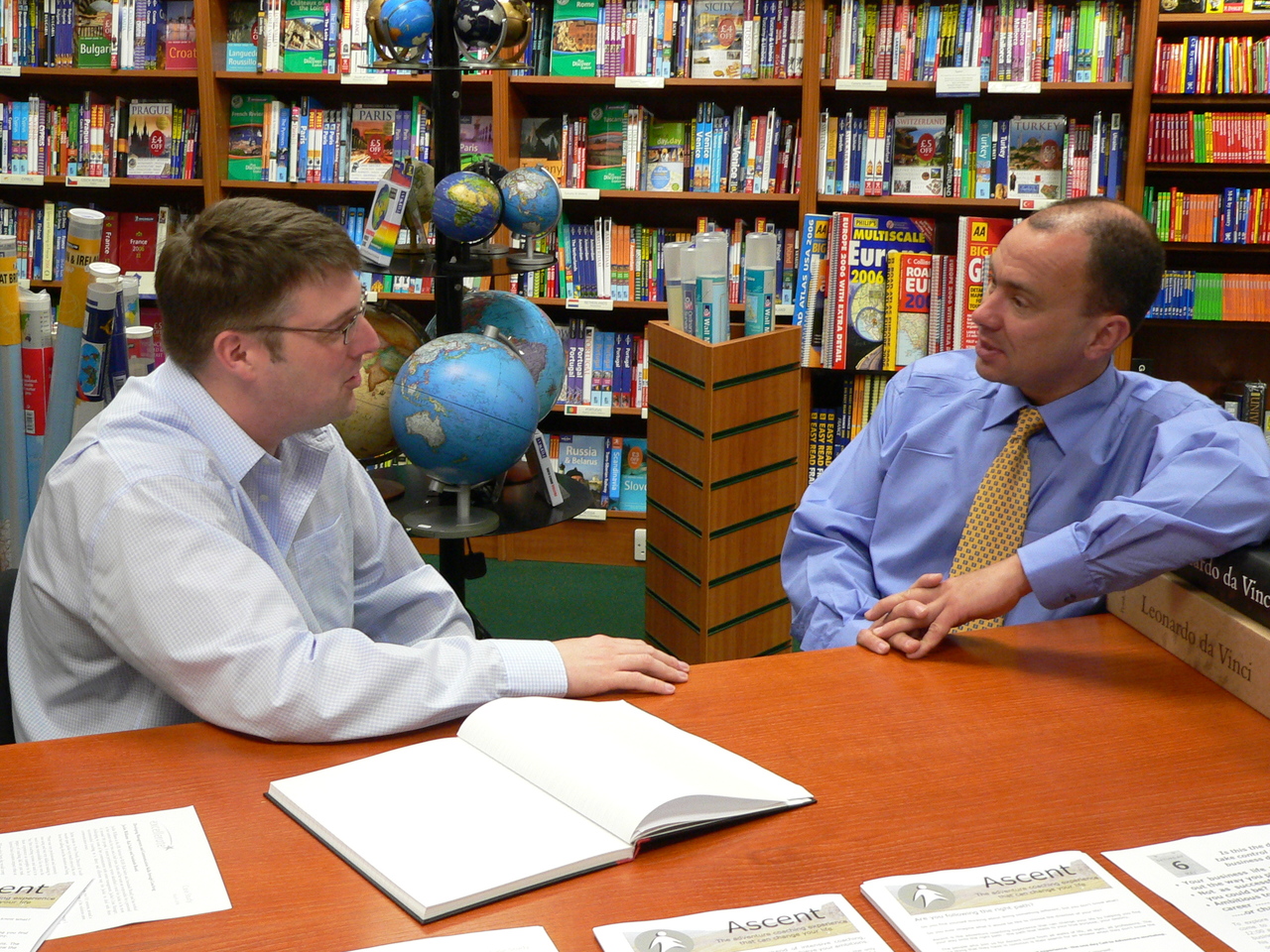 More and more organisations are using coaching as a L&D intervention, or even as a surrogate for good management practice. Some evidence says that coaching is highly effective in the organisational context, but is notably lacking in any hard evidence of organisational outcomes.

What, then, are the factors that influence the success of organisational coaching?

I ran two workshops at the South West Coaching and Mentoring Conference 2017.

My first session ws an easy way for coaches to ask questions to access their client's creativity, "Helping clients get unstuck with The Unsticker".

You can download the slides and the notes and watch a video on YouTube. Unfortunately I managed to video the wall, so you can hear the presentation set to the slides over at YouTube.

The first point that we have to consider is an obvious one; does coaching actually ‘work’? And doesn’t that depend on what we mean by ‘work’?

For most people in the corporate environment, ‘work’ means an increase in performance, or retention, or engagement, or job satisfaction. In other words, ‘work’ means that coaching solves the problem that you were trying to solve.

However, engaging a coach to solve a problem is a remedial focus, and that’s not what coaching is designed for. From the very start, we have a misalignment of purpose, and that’s going to affect your results. 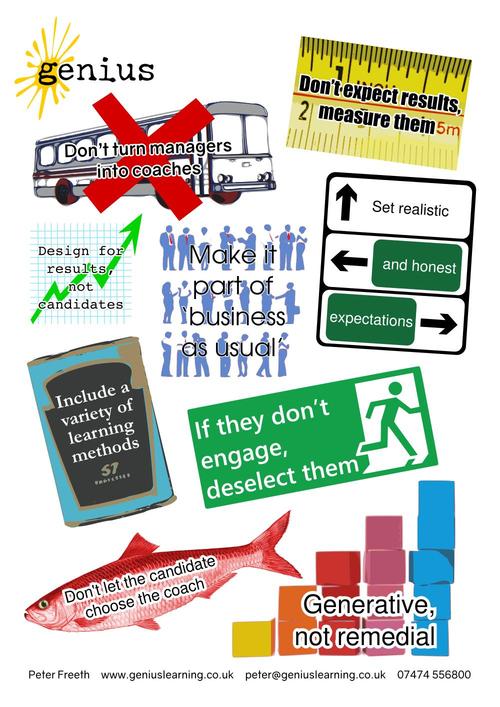 The CIPD did some research in 2004 and found the following:

From this, we can conclude that coaching is great!

There’s very little objective data on this. Deviney (2000) researched line management coaches and found that there was no change in the employees’ rating of their managers’ skills after the coaching. Duijts (2008) researched coaching as a means to reduce stress-related absence. After the coaching, there was no change in self-reported sickness absence.

However, these are remedial situations, and coaching is not a remedial learning method. Imagine going to your doctor to get help with persistent headaches. She diagnoses stress and tells you to take up art as a hobby. But what about the headache you've got right now? In such a situation, a good coach has to work hard to turn a remedial need into a generative one, otherwise coaching will continue to be ineffective; nothing more than giving the client an aspirin.

Of course, coaching might also mean one to one training, mentoring, even counselling. The term 'coaching' has become generalised from its true meaning, into a catch-all covering any 1:1 interaction. I hear team leaders in call centres say, "I'm going to give you a coaching session" when they really mean a performance management conversation. If the client doesn't have a say in the solution, it's not coaching.

Coaching does not solve performance management problems – managers do! Coaches are often used as surrogate managers, which doesn’t solve the problem, it just moves it somewhere else. The coach can’t stay on the payroll for ever. Coaching does accelerate step change, even if we can’t predict where that will lead.

When you plant a tree in your garden, you have an idea of how that tree might grow, but in reality it will grow where it wants to grow, based on its environment and how you treat it.

Fundamentally, coaching is most effective when you use it for the purpose it was designed, as a generative, developmental learning method. When you want to give people opportunities to be challenged, to learn and to develop through high quality feedback, you know that there will be a measurable result, so figuring out how to measure that is far more important. Through measurement, you can check that the coaching process is delivering the outcomes that you hoped for. If you link that measurement back to the reasons that you started the process, you are able to demonstrate that coaching ‘worked’ in relation to the event or situation that led you down that path.

And finally, the single most effective way to increase overall engagement in a coaching program is to deselect people who choose not to engage with it. When people don’t book sessions, or fail to turn up for sessions that they have booked, remove them from the process. It’s not a punishment, simply a way to respect the choice that they have freely made. It sends an important message to everyone else, that coaching is a choice, that it is not mandatory, and that the people who do commit to it will get benefits from that commitment, and the people who won’t or can’t commit at that time might have another opportunity later on.

An important question that came up in the workshop Q&A was on the point about clients choosing coaches. If the correct intervention for you is counselling then psychological safety is the number one success factor, and it is imperative that the client chooses the counsellor. However, coaching is not counselling, it is outcome-oriented, goal-focused and, most importantly, sponsored by an organisation for organisational outcomes. It is a 1:1 learning intervention. Staff don't get to choose the time management trainer or University lecturer. The organisational manager or sponsor chooses the supplier that best meets the needs of the project, and this confers credibility to the coach.

If an internal part-time coach has a 'reputation' which makes potential clients avoid them e.g. lack of confidentiality, then that person cannot be a coach anyway, because they fail to meet one of the fundamental criteria for coaching. They might still be a mentor, though. If we allow clients to select coaches based on liking, then that liking is a factor of current reality. Since we want to change that reality, we need a coach who can focus on results and adopt a wide range of approaches without getting bogged down with being likeable. If the client doesn't approve of that then coaching is the wrong intervention. Therefore, for the people who are ready for step change, personal growth etc then the selection of a coach with a track record of that type of work is expected. "You wanted career growth, I hired the best coach to help you with that". Giving people the choice to make for themselves in such a situaiton is not reasonable, because the client does not have the understanding of L&D interventions to make an informed decision. That would be like asking a 5 year odl child to choose the best teacher.

This may sound harsh.... in fact is is fair. Staff are employed to do jobs, and an employer can provide facilitites and services that increase productivity, and coaching can be one of those services. It just so happens to also be beneficial to the employe outside of work too, so it's a nice win-win.

I suppose this raises another golden rule... don't provide a counselling service for your staff and call it coaching, it isn't, and it just confuses everyone. In fact, I did originally put that into the presentaiton, then I couldn't remember why I'd put it in so I took it out. Here's the diagram that went with it:

I think I was supposed to say that coaching sits on a spectrum of interventions, and a line manager is not part of that spectrum, neither is a friend.

I hope that explains things a little more clearly. Discussions like the one we had in the presentation are helpful for everyone to try out different points of view and develop our learning - that's what conferences are for!