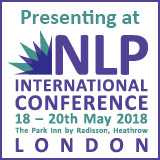 I spoke for the third year running at the International NLP Conference in London on May 19th 2018, this time with a session entitled "Helping clients get unstuck with The Unsticker" which is an easy way for coaches to ask questions to access their client's natural creativity and break free from 'stuck' states.

Visit The Unsticker online and get the free Android version to have portable Unsticky goodness wherever you go. You can also buy the book if you like.

The online and app Unstickers have 200 questions, the book has 333 questions.

You'll find a link to the video of my workshop here, and here's a bonus video which explains how The Unsticker, and the general principle of non-contextual questioning, works.

There are 200 questions in the app, 301 in the book, which are asked randomly. It's very likely that your problem is outside of your current environment, therefore you are carrying around a representation or model of it. Solving the problem does not mean changing the situation, it means changing your model of the situation. What then happens is that, in the reality of the situation, you behave differently because you feel and think differently. If we define a problem as a set of relationships between the elements of a system which mean that you are unable to achieve your desired outcome then we don't have to change anything in those elements, we only have to change the relationships. Once those relationships change, you will act in a way which had previously been unavailable to you and you will solve the problem.

Most people report that after 4 or 5 questions, either their perspective of the problem has changed dramatically, or the problem seems to be 'solved' altogether.

When a coach asks a client a question about a problem, the coach is trying to figure out the problem and ask a relevant question, which means that the problem sets the ground rules. The question, and all possible answers, will always be constrained by the problem because they at least presuppose that the problem exists as the client has described it.

Let me just emphasise that... whenever you ask a question in response to the client's description of reality, you are implicitly accepting that reality and becoming part of it.

It is impractical for a coach to ask random questions, because their train of thought will inevitably be influenced by the 'problem' reality.

The Unsticker generates questions that are random in sequence but very specific in purpose. Each one has a strucutre which works in a particular way. If you look through a few questions, you'll see what I mean.

I've given you enough information here to figure out how it works, but I'm not going to explain it too much, because that would give you the answers on a plate, which is not what The Unsticker is all about.