I ran two workshops at the South West Coaching and Mentoring Conference 2017, here are some useful resources for you.

My first session ws an easy way for coaches to ask questions to access their client's creativity, "Helping clients get unstuck with The Unsticker".

There are 200 questions in the app, 301 in the book, which are asked randomly. It's very likely that your problem is outside of your current environment, therefore you are carrying around a representation or model of it. Solving the problem does not mean changing the situation, it means changing your model of the situation. What then happens is that, in the reality of the situation, you behave differently because you feel and think differently. If we define a problem as a set of relationships between the elements of a system which mean that you are unable to achieve your desired outcome then we don't have to change anything in those elements, we only have to change the relationships. Once those relationships change, you will act in a way which had previously been unavailable to you and you will solve the problem.

Most people report that after 4 or 5 questions, either their perspective of the problem has changed dramatically, or the problem seems to be 'solved' altogether.

When a coach asks a client a question about a problem, the coach is trying to figure out the problem and ask a relevant question, which means that the problem sets the ground rules. The question, and all possible answers, will always be constrained by the problem because they at least presuppose that the problem exists as the client has described it.

Let me just emphasise that... whenever you ask a question in response to the client's description of reality, you are implicitly accepting that reality and becoming part of it.

It is impractical for a coach to ask random questions, because their train of thought will inevitably be influenced by the 'problem' reality.

The Unsticker generates questions that are random in sequence but very specific in purpose. Each one has a strucutre which works in a particular way. If you look through a few questions, you'll see what I mean.

I've given you enough information here to figure out how it works, but I'm not going to explain it too much, because that would give you the answers on a plate, which is not what The Unsticker is all about. 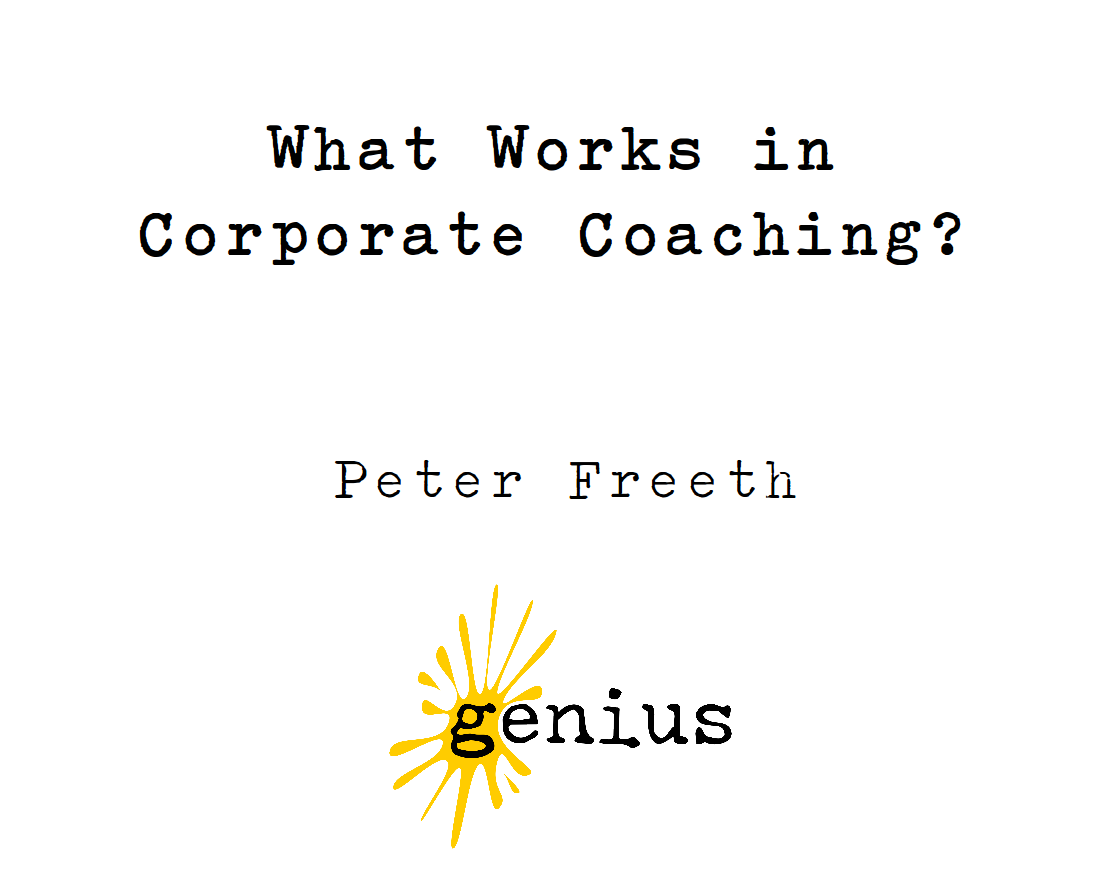 You can download the slides and the notes and watch a video on YouTube. Unfortunately I managed to video the wall, so instead of seeing me jumping round the room in an entertaining manner, you can hear the presentation set to the slides over at YouTube.

I don't think I can say much more about the presentation than that, other than to expand on the point about clients choosing coaches. If the correct intervention for you is counselling then psychological safety is the number one success factor, and it is imperative that the client chooses the counsellor. However, coaching is not counselling, it is outcome-oriented, goal-focused and, most importantly, sponsored by an organisation for organisational outcomes. It is a 1:1 learning intervention. Staff don't get to choose the time management trainer or University lecturer. The organisational manager or sponsor chooses the supplier that best meets the needs of the project, and this confers credibility to the coach.

If an internal part-time coach has a 'reputation' which makes potential clients avoid them e.g. lack of confidentiality, then that person cannot be a coach anyway, because they fail to meet one of the fundamental criteria for coaching. They might still be a mentor, though. If we allow clients to select coaches based on liking, then that liking is a factor of current reality. Since we want to change that reality, we need a coach who can focus on results and adopt a wide range of approaches without getting bogged down with being likeable. If the client doesn't approve of that then coaching is the wrong intervention. Therefore, for the people who are ready for step change, personal growth etc then the selection of a coach with a track record of that type of work is expected. "You wanted career growth, I hired the best coach to help you with that". Giving people the choice to make for themselves in such a situaiton is not reasonable, because the client does not have the understanding of L&D interventions to make an informed decision. That would be like asking a 5 year odl child to choose the best teacher.

This may sound harsh.... in fact is is fair. Staff are employed to do jobs, and an employer can provide facilitites and services that increase productivity, and coaching can be one of those services. It just so happens to also be beneficial to the employe outside of work too, so it's a nice win-win.

I suppose this raises another golden rule... don't provide a counselling service for your staff and call it coaching, it isn't, and it just confuses everyone. In fact, I did originally put that into the presentaiton, then I couldn't remember why I'd put it in so I took it out. Here's the diagram that went with it:

I think I was supposed to say that coaching sits on a spectrum of interventions, and a line manager is not part of that spectrum, neither is a friend.

I hope that explains things a little more clearly. Discussions like the one we had in the presentation are helpful for everyone to try out different points of view and develop our learning - that's what conferences are for!